BLOCKCHAIN : the technology that could transform the ecosystem of all our transactions 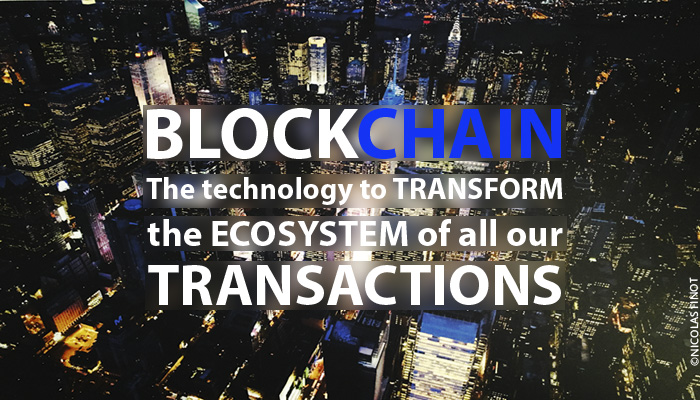 The Blockchain, or merely put “chain of blocks”, is the technology that has become the point of focus of many discussions for a couple months among the FinTech and banking spheres and which is described as having the potential to be as revolutionary as the creation of the internet. What is it exactly? What are its possible applications and is this really the saving and foolproof technology that the world economy expected?

What is the Blockchain?

The Blockchain, written with its capital letter, is a conceptual technology for some, however a quite effective one for others. Either way it is considered as an innovation at least as disruptive as the creation of the internet protocol.

This is the technology behind the bitcoin, which is only an application among many others and which allows to stock the information of a transaction on a decentralized ledger, an online database called blockchain (written with a lowercase letter) – supposedly unfalsifiable for it is based on cryptosignatures, where blocks of data are exchanged between the servers of users. Each new block of data has to be validated by many users before the update of the blockchain could happen.

Who invented that technology and when?

The Blockchain technology emerged within a context of financial crisis and of a crisis of confidence in the financial institutions, the states and the currencies. That is in this very configuration that the idea of creating a digital currency took shape.

In 2009 a developer or group of developers using the pseudonym Satoshi Nakamoto created the first digital currency or peer to peer crypto-currency: the bitcoin. The name bitcoin actually describes two things at the same time: first off a payment system through the internet, and then the unit of account used on the same system.

If we consider the payment system, its operating principle is to record and maintain, just as an accounting setup would do, the life history of each of the units of account “bitcoins” having participated to a transaction, on a public ledger maintained by each user of the service, and every bitcoin being trackable, the ledger is supposedly unfalsifiable.

What could be the practical applications of this technology for both consumers and companies?

That is the question that the “Consensus 2016” – 2nd annual summit on the Blockchain technology taking place in New York from 2 to 4 May 2016 – will try to answer with the help of professionals from the industry leader startups, investment companies, financial services institutions and policy and university groups.

This technology allows to record, store and transmit information validated by crypto-signatures. It operates without a controlling central infrastructure since the warranty and verification role is ensured by having the information received and transmitted by the different network nodes compared.

Blockchain could thus have a considerable impact over all the activity sectors operating nowadays with intermediaries such as trusted third-parties or escrows and whose existence would merely be jeopardized, de facto benefiting the consumer, who would therefore have access to transactions at a much lower cost since they would be deprived of the intermediary’s commission.

As such Blockchain technology could very much become the reference computer system (and perhaps the only necessary) to guaranty a new economy based on transparency (a trace of each transaction is recorded), security (the system is said to be unfalsifiable) and the responsibility of everyone (due to the fact that the system is based on the amount of its constituent nodes rather than on a centralized infrastructure).

Beyond the traceability of crypto-currencies such as bitcoin, the applications of this technology are wide and can already concern, at the very least theoretically speaking, domains as varied as:

If new ideas of applications of this technology appear everyday, time only will tell which are legit.

What are the limits or weaknesses of that technology?

There are however reasons to question the way this technology can be used. Research has recently shown that bitcoin transactions from the dark market (300 to $500 000 a day) approximately equaled the volume of bitpay transactions – bitcoin payment platform ($435 000 a day).

By dark market we generally mean buying or selling drugs, weapons and any other illegal activities. But these activities would actually represent only a very small part of the entire black market. Not declaring one’s employees, taking cash payments and other activities where taxation is avoided, that is where the majority of the black market lies.

If crypto-currencies can escape regulation because of how they’re built, they nonetheless are monitored by monetary authorities that seek to control the legality of goods and services purchased through them and to monitor the conversion into legal currencies to detect and avoid money laundry from criminal origin.

Is Blockchain an opportunity or a threat for the banking industry?

It all depends on the position we adopt.

Referring to the theme of disintermediation, Blockchain can represent a threat to the extent that it directly jeopardizes the settlement activities that were so far provided by such intermediaries as clearing houses.

Referring also to the concepts of “traceability” and “distributed consensus”, Blockchain would allow, by making public the history of interbank transactions, to give everyone access to banks’ exposure levels, which would therefore force them to better regulate themselves and reconsider twice the decision of implementing leverage strategies or at least build more business ethics into their investment strategies.

Does that mean these intermediaries of financial transactions would be subject to their planned obsolescence?

Not necessarily. The contrary would actually be more accurate. Indeed, a pool of big international banks, among which Goldman Sachs and JP Morgan, is working towards reclaiming the Blockchain technology, with the idea of setting up “private” blockchains – we are here talking about the databases organized following the eponymous technology – which purpose would be to be closed and which access to the ledger would be controlled by invitation with a limited number of users. Thereby putting into question the Blockchain’s guiding principles of openness and transparency through “distributed consensus” or sharing of the registry, banks reaffirm their commitment to remain the only guarantors of the functioning of the international financial system.

Could banks transform this threat into an opportunity?

They sure could. And will. Let us first understand that simply using Blockchain in its initial concept – that where it is public and accessible by anyone and where the ledger is shared, transparent and maintained by all participants – would allow banks to save about 15 to 20 billion dollars a year until 2022 merely due to cost reduction. As such, that is already an unprecedented opportunity to dramatically increase their profitability.

And while FinTechs – these startups exploiting technologic innovation in the banking, insurance and finance industry in order to transform the uses – have invested niches on which traditional banks have been unable or unwilling to position themselves so far, for they would have de facto contributed to the cannibalization of their own offers, banks could very well ultimately attempt to reclaim these niches after having reclaimed Blockchain technology.